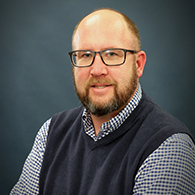 Matt Arsenault comes to Mount Aloysius College from Western Michigan University where he earned his Ph.D. in political science, specializing in comparative politics.

In 2010 – 2011, Dr. Arsenault worked as an intelligence analyst for the U.S. Army in eastern Iraq. Arsenault’s research focused on the shift of insurgent groups into the burgeoning Iraqi political system.

Upon returning from Iraq, Arsenault was appointed a Presidential Management Fellow with the Consumer Financial Protection Bureau. He worked on the design and implementation of testing procedures to ensure compliance with Dodd-Frank Act financial regulations.

Arsenault’s current research interests focus on insurgency and counterinsurgency strategy and tactics. He is currently working on a book-length project on the African Bush Wars.

Take the Next Steps